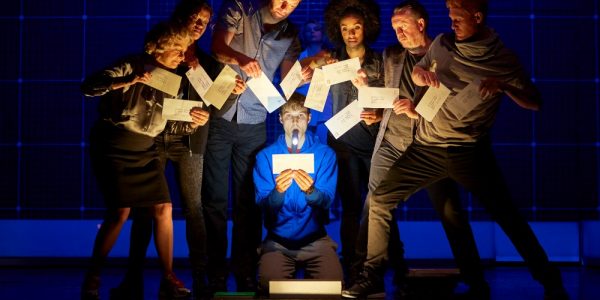 “Staging the Unstageable”: The story behind Curious Incident

Watch and read below to discover how The Curious Incident of the Dog in the Night-Time was brought to life; including interviews with Mark Haddon, Simon Stephens, Marianne Elliot and reactions from celebrities who have seen the play.

Mark Haddon: I was absolutely convinced that my novel was un-filmable and unstageable. Simon’s genius was to realise that I was completely and utterly wrong.

Christopher: “My name is Christopher John Francis Boone. I like Maths, outer space, looking after Toby and I see everything.”

Marianne Elliot: I felt that it would be wonderful to be immersed in it. Breathing the same air as Christopher does, completely inside his head.

Tom Hiddleston (Presenting the Olivier Awards, 2013): And the winner: The Curious Incident of the Dog in the Night-Time

Alice Levine (Presenter, BBC Radio 1): “There’s just so much to take in.”

Maisie Williams (Actress, Game of Thrones): “Absolutely blown away by it!”

Kelly Ripa (on Live with Kelly & Michael): I saw a play last night that I want to encourage everybody to see, it’s The Curious Incident of the Dog in the Night-Time. Everything about it is incredible.

Whoopi Goldberg (on The View): I saw an amazing show last night; I just want to tell you about it. It’s called The Curious Incident of the Dog in the Night-Time. These performances knocked me out, I mean stunned me! That’s how good they were, it’s been a long time since I get knocked out. There wasn’t a bad performance.

Marianne Elliot: It’s about all of us encountering things that we find overwhelming, confusing and feeling that fear but driving through anyway.