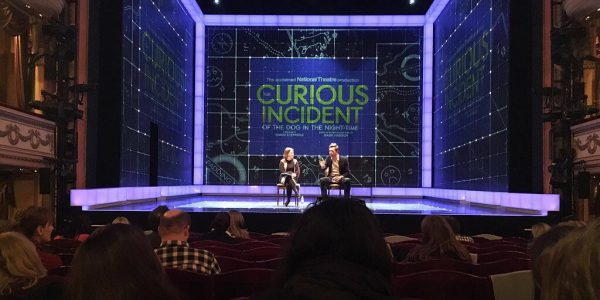 Discover Playwright Simon Stephens‘ background as a teacher, how this affected his work on The Curious Incident of the Dog in the Night-Time and some advice for teachers.

“I was a school teacher at East Brook School in Dagenham in Essex. It’s a very extraordinary place that has galvanised and inspired me ever since. I think school teaching runs in my family; my mum was a teacher, my grandad was a teacher, my nephew’s a teacher, my daughter wants desperately to be a teacher and I was a teacher for a while. One of the most profound experiences that I’ve had as a teacher, on occasion you could mark a book, read something that a student has written that opens up a perspective on that student that you’ve never had before and it’s utterly magical. I wanted the play to be about that, I wanted it to be about the gesture of teaching, the possibility of teaching. I think it’s a politically radical gesture to take somebody and have faith in them that you can make them better if you work together. I think it’s charged with potential, I think theatre and education share that gesture.”

Q. So you actually studied History, but became an English teacher, we are curious to know why?

Simon Stephens: “I wanted to be a writer; when I was in 6th form I could’ve studied either History or English at University. I didn’t really want to study both; I wanted my relationship with literature to remain that of a lover rather than that of a scholar. I was fascinated by History, I think there are relationships between historians and dramatists in that playwrights consider the things that people do while Historians consider the things that people have done. There was a big long gap between leaving university and becoming a teacher where I was just trying to write. Then myself and my wife decided that we were going to have a family, I kind of thought that I couldn’t really support my family and children on a barman’s wages, so I retrained as a school teacher. I don’t know if I was a good teacher, I did a few good lessons, it wasn’t long enough to be a good teacher. I think a lot of school kid’s labour on the weak illusion that teaching is an innate skill, because that’s how we experience teachers. We have the phrase that they can or they can’t teach. And what I learnt about teaching is that teaching is something you learn, I was getting better. I’d trained for a year at the Institute of Education, East Brook School in Dagenham was my placement school and then I did a full year and 1 term at East Brook. And then I was offered the opportunity to become resident dramatist at the Royal Court Theatre. I remember the day I told my form I was leaving, I really welled up. People say you should never cry in front of kids, I cry in front of kids all the time, I think they should have men crying in front of them, it was really moving, really beautiful.”

Q. How did your teaching inform the writing that you subsequently did?

Simon Stephens: “Massively! And continues to, not just The Curious Incident, the other plays that I’ve written, those brutal, savage, horrible ones are normally about the kids I taught in Dagenham! I nicked some great ideas off them! No that’s not true…

I think one of the experiences of teaching was it rendered more complicated that perception of what it is that makes a human being. It was an extraordinary thing to become a parent while I was teaching. It felt like a very political moment that my child was born into a world that I realised he would benefit from, from his first day of life. He was going to be surrounded by parents who loved him, he was going to be raised in a world of books and that these kids who I was teaching didn’t necessarily have that. That felt politically, profoundly, metabolically downright unfair. It galvanised my political sensibility. The plays that I wrote when I left teaching were massively informed by that. I’ve written again and again and again about kids. I’ve always tried to write as honestly as I can about kids because they moved me when I was a teacher, they inspired me. They were difficult, and it was difficult teaching. There is nothing I’ve experienced as a playwright that was anywhere near as difficult as that year and a half teaching. It’s defined the person I am.”

Q. You’ve made some comparisons between the rehearsal room and the classroom, obviously your experience in the classroom has informed your drama. What advice could you give about methods and processes and ways of working that you’ve learnt in the rehearsal room which you would bring back to teaching? And linking to that, if you were to teach Curious Incident where would you start?

Simon Stephens: “That’s a brilliant question! When I was working as a school teacher, one of the elements that we had to teach in the GCSE coursework was students needing to demonstrate and understand dramatic action. I remember teaching that and finding it a really complicated idea to communicate and it was in my year as a resident dramatist at the Royal Court that I really began to understand what dramatic action means. Somebody asked me “can you define for me Dramatic Action” in class and I said “Dramatic Action is the behavioural tactics that a character uses as they try to overcome obstacles to try to get what they want.” I think it’s a way of reading plays that examines not what characters are saying or feeling or remembering but what they are doing to each other. What they want in a given scene, what’s stopping them from getting what they want and what they do to get it? I think that’s the only way to read a play actually. And it’s certainly something that sits in all of Marianne Elliot’s readings of every play of mine. She’ll very carefully try and understand what every character, not what they’re saying or feeling or remembering or observing but what they’re doing to each other.

I think if I was teaching this play I’d try and look at that, what are these characters doing to one another? I wish when I was teaching Drama and English GCSE that I’d read the play as much as possible in one go. There’s nothing as bewildering and deadening than breaking the play up into a course of 4 or 5 or 6 lessons. Get the hit of it if you possibly can.

I worked in a school where if you moved desks to one side, there would be a lot of disapproval from the Head of English, let alone the Deputy Head and the kids would find it such a transgression of the convention that it would be difficult to control. If you’re fortunate enough to not be in that type of school, brilliant, because I do think having some way of getting a student to think about how they would go about acting it out rather than just read it like a poem or an extract from a novel, I think that’s the key to understanding this. For me this play-script is not a piece of literature, it’s a series of suggestions towards a theatrical experience. Plays don’t belong on a page; they belong in the space between the stage and the audience. If you can communicate any of that I think you’ll be a much better teacher at Drama and English GCSE than I ever was.”