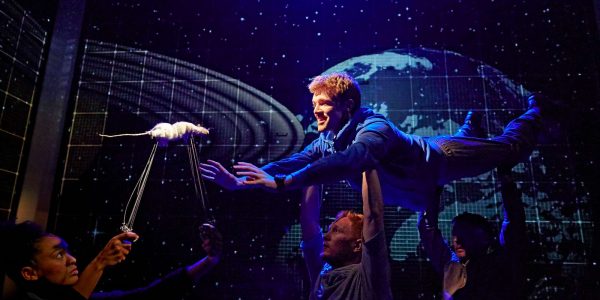 I’ve got 2 contradictory answers to that, I would query this notion of “Physical Theatre” because for me, theatre is necessarily physical. An actor on a stage is a physical phenomenon, even if they’re in the most conservative Am Dram production of a Noel Coward play. It’s a physical body in space and time.

I think what you mean is that heightened physicality that Frantic Assembly brought to it. You know it’s interesting having taught plays at GCSE English the convention that underpinned the plays that used to be on the syllabus until about 3 years ago and on the syllabus while I was there; plays by people like Arthur Miller and Jamie Priestley, George Bernard Shore, Tennessee Williams. You read those plays and the stage directions read like works of literature, they’re exquisitely poised stage directions. George Bernard Shore’s stage directions would be 3 pages of how the stage looks, he’s writing like a novelist. For me, that’s not an interest I have in making Theatre, for me the play script has a different function. For me the play script has the function of provoking thought in the rehearsal room. So I wanted a play script that was as much like a puzzle as anything else. All I prescribed was the words that people spoke, and I left it up to the rehearsal room to decipher the way that they might be spoken. This has 2 advantages I think; 1 is that it means that the rehearsal room is innately, metabolically creative. You can’t rehearse this play by following the stage directions and standing where George Bernard Shore tells you to stand, you have to bring yourself to it, and you have to bring your imagination. The other advantage of that is that it can create a multiplicity of different productions. There is no right way of making The Curious Incident of the Dog in the Night-Time and I’ve been to schools and watched school kids respond to my play and bring their imagination and intelligence to it and make work which is radically different to what you see in the West End. I think if I prescribed “they carry Christopher and he walked horizontally across the wall” it would actually have killed it.

One of the brilliant things about having Frantic Assembly on board was that they were able to bring some very pragmatic solutions to some quite particular problems, such as getting from Swindon to Paddington train station.

I think the stylised ensemble nature of this production is important because it’s all about Christopher’s take on the world. Nothing really exists unless Christopher wants it to, so the company will be chaos, they will be flitting around until Christopher focuses then they will snap into position. They represent his thoughts; they can be chaotic and they can be absolutely pure and linear and precise, whatever state of mind he is in.

I think physical theatre is a very dynamic way of exploring a subtext in any kind of context. If you think of everyday life, people just sitting opposite each other talking, there are the words but there’s also the body language, and that’s just at a naturalistic level. It actually embraces a whole range of dynamic choreography. It can explode into dance, it just shows often what’s existing underneath; the aches, the desires, the needs that aren’t expressed verbally.

It’s always helpful when a writer is prepared to be very ambitious, Simon really wanted that immediacy and economy that physicality could provide. He didn’t want to go into a whole world of exposition. Because we’re dealing with a very particular mind, what Mark Haddon does brilliantly is take his reader into that mind. And so this production had to bring the audience into the mind of Christopher Boone, we had to see the world from his point of view.

I asked Steve (Hoggett) to get involved because I knew it would be very physical and we wanted to make it emotional and poetic and interesting without it being realistic. That means that you show things in a way that is physical rather than somebody actually walks through the door, or puts the key in the door and opens it, then puts the key on the side. You actually do something which is much more gestural.

I knew that the boy playing Christopher would need to be a very physical actor and be able to express things physically in a way that he possibly can’t articulate verbally. It is a surprisingly difficult thing to achieve quite simple movements because they have to be very exact and it has to be properly thought out, it has to be on exactly the right beat.