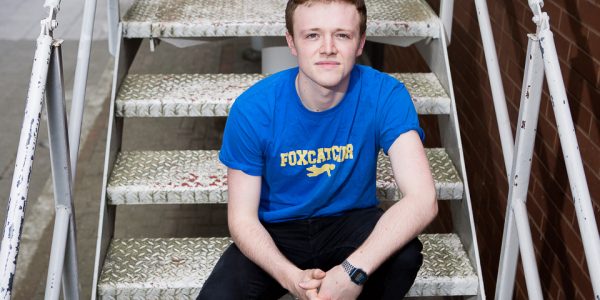 As our new cast prepare to begin performances next week, we caught up with our next Christopher Boone, Joseph Ayre, to find out what inspires him and what he is most looking forward to about being in the show.

Tell us a little bit about yourself…

I am 22, just come out of drama school, a northerner in the big city. I’m quite a laid back guy and a self-professed geek!

How much did you know about the story before you joined the show?

I’d heard of the book but I’d never read it, nor had I seen the show. I first read the full script when I got the audition and it blew me away!

What do you think the most challenging thing about your role will be?

Well the physical aspect of the show is a big challenge. But for me, the biggest challenge is portraying a character with Autism realistically and without judgement.

Do you have any traditional Pre show habits you might continue for The Curious Incident?

A lot of pacing and a lot of sweating!

Who/What inspired you to become a performer?

I had an amazing drama teacher at school called Miss Burgess who said she thought I had what it takes and told me about drama schools, the rest is history!

What do you like to do when you’re not performing?

I’m a big movie fan so watching films, playing video games, generally anything that allows me to be horizontal e.g. sleeping!

What are you most looking forward to about being part of The Curious Incident?

When my family come and see the show. They’ve supported me every step of the way and now they get to see something I’m in!

Book your tickets now to come and see our new cast in action from 20th June 2016.