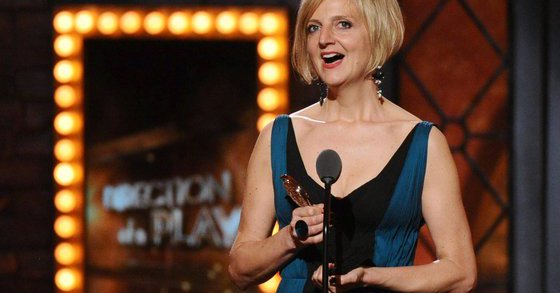 An Interview with Marianne Elliott

The Globe and Mail speak to director Marianne Elliott about her career, including her work on THE CURIOUS INCIDENT OF THE DOG IN THE NIGHT-TIME.

Marianne Elliott, who spent 10 years as an associate director at Britain’s National Theatre, is one of the most acclaimed stage directors working in England today.

She won her first Tony Award for her work on War Horse in 2011 – and a second in 2015 for her production of The Curious Incident of the Dog in the Night-Time, playwright Simon Stephens’s adaptation of Mark Haddon’s novel about a 15-year-old boy with autism spectrum disorder investigating the death of a dog.

The latter is now on a tour stop in Toronto as part of the Mirvish season. The Globe and Mail’s theatre critic J. Kelly Nestruck spoke to Elliott over the phone from London at the end of a day where she had both rehearsed a play for her new company, Elliott and Harper Productions, and held auditions for the Broadway transfer of her National Theatre production of Angels in America.

You’re in the middle of directing another Simon Stephens play, Heisenberg, on the West End – but try if you can to cast your mind back to this one. Did you have any idea The Curious Incident of the Dog in the Night-Time would still be touring around five years on?

Oh, no, absolutely no idea. I suppose what’s so amazing about working at the National Theatre is that because it’s a subsidized theatre you’re not trying to create a product that’s going to have a mass market in order to make the money back. We were taking a lot of risks and pushing all of us beyond our comfort zone – including Simon Stephens.

Mark Haddon, the author of the novel, met Stephens and asked him if he would adapt it – and your involvement came when he brought you a script, right?

Simon did it on the quiet, secretly, didn’t tell anybody he was doing it. He came out with this draft – and he didn’t really know fully what to do with it and sent it to me. I read it as a friend, not as a prospective director. By the end of reading it, I was totally floored, devastated emotionally – and so I then took it to Nick Hytner, who was running the National Theatre at the time and said, “Please let me do it.”

How did you and designer Bunny Christie set about figuring how to take an audience into Christopher’s head?

It was a very long process, actually. Eventually, we landed on the idea that actually what was so successful about the book was that you felt like you were Christopher when you read it.You felt like you saw the world through his eyes. That’s what we wanted to do, create the whole stage as his world and the way that he sees the world. He doesn’t necessarily see the details that you and I see; he sees one thing – a hedge cutter, or a glove – and he really focuses on that. He jumps all over the place in the telling of the story, so we felt like we needed to be in the kitchen one second and, literally the next second, we needed to be in the street.Therefore, we needed a set that was going to enable us to do that with great agility.

When I reviewed the show in New York, I wrote that you used “all sorts of clever, theatrical ways to take us into Christopher’s unique, math-obsessed mind on a high-tech, holodeck-styled set.” I was struck by how your production balanced physical theatre with the technological elements. Were you trying to marry two styles of theatre?

I think we were just trying to use anything within our power as a creative team and there were people on that team who were very technological, like the projection designer, and there were also people on that team who were from the world of physical theatre, like the choreographers [from] Frantic Assembly. We really worked together as a team and it was always about the best way to describe in each moment what is happening to Christopher, to make the audience feel like they are viscerally affected in the same way that he is affected.

Both War Horse, which played in Toronto for a long time, and Curious Incident have their roots in young adult fiction. It’s such a huge part of the publishing industry – were these plays part of a plan to see if that could be extended to the stage?

I think it was sort of happenstance. I had a young daughter at the time of doing War Horse – who found War Horse way too frightening and still does, but she totally loved Curious. I just think that you have to approach anything you do with a huge amount of integrity – I don’t really care where it comes from, whether it’s a children’s piece or an adult piece.

Can you tell me a little bit about your friendship with Simon Stephens?

I got to know him when he was very young: I was at the Royal Exchange in Manchester and he was a Mancunian writer. We worked on various things, but when we were taking Curious Incident to the West End [in 2013], we were being interviewed by a journalist – and we knew we both came from Stockport, but we only realized then that we used to get the same bus to school and we used to wait at the same bus stop. It’s kind of mind-blowing. That plays into the play we’re doing right now, Heisenberg, which is about how uncertain life is and how surprising it is and how it can take you down all sorts of roads, but you’d never predict it even the second before.

In Toronto, we’re also seeing Heisenberg soon at Canadian Stage. I find Simon Stephens harder to peg than other British playwrights who have risen to prominence. What is it about his work that appeals to you?

I’m not necessarily the director for all his work; it’s quite eclectic, as you say. What I do find in his work is a massive heart – he has such a huge heart for his characters – and his struggle for him to understand humanity. That’s what I find I’m drawn to. I suppose I always find a lot of characters that are deeply, deeply keening with a sense of yearning and desire through sadness, but they have a bravery that keeps them going despite that.

Your production of Angels in America – starring Nathan Lane and Andrew Garfield and soon transferring to Broadway – was seen by many people here in Canada through National Theatre Live. But I was looking through your credits and saw you directed what is probably Canada’s best-known play from the AIDS crisis, Brad Fraser’s Poor Super Man, in Manchester. Did you think back on that at all in directing Angels?

Yes, a little bit. But I grew up in the eighties, it’s a very formative time for me, and AIDS was massive issue. It’s always going to be something that I find fascinating. For me, Angels in America is not really about AIDS. For me, it’s a metaphor for anybody who is struggling with serious illness or having to face their own demise. All of the characters face some form of destruction in themselves.

The National seems like a great home for an artist. Why have you left it to run your own company, Elliott and Harper?

I may well regret it. I’d been at the National for 10 years and I knew that I didn’t want to be the artistic director of a building – because there’s all sorts of things that pull you away from the matter at hand, which is making really good art. Then [producer] Chris Harper, who I’ve worked with for many years, said: “Why don’t we set up our own company?” It just seemed like an absolute no-brainer. I’d have more control over what I did. I quite like to be in the driver’s seat about how I do these shows or where I do them or when I do them. 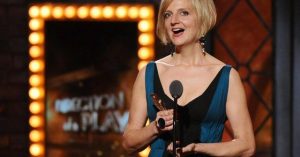 Marianne Elliott accepts the Tony award for best direction of a play for “The Curious Incident of the Dog in the Night-Time” at the 69th annual Tony Awards at Radio City Music Hall on June 7, 2015, in New York