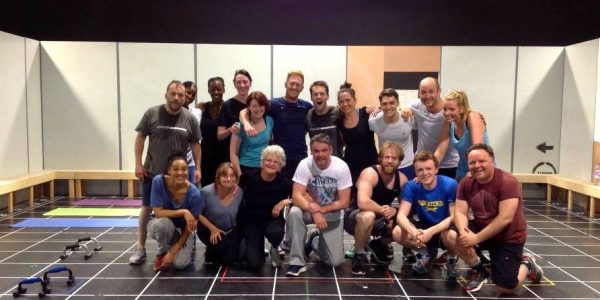 Inside the Rehearsal Room

As the new cast of The Curious Incident of the Dog in the Night-Time prepare to take the stage, David Nellist, who will play Reverend Peters, takes us behind the scenes of a typical day in the rehearsal room.

It’s week 2 of The Curious Incident rehearsals and the company are all bonding well. The boot camp is in full swing; we start each morning with an hours physical including circuit training which is tough but great. We then spend the next 2 hours getting to know the physical side of the show. Soon our world is full of “Tube Nightmares, Swindon 5s and Calippos!”

The afternoon is spent working our way through Act 1. It’s great that we have 4 cast members who are currently performing in the show so they can nudge you when you go left when everyone else is going right. To be fair that’s just me!

The speed at which Joe (Ayre) and Tom (Dennis), our 2 Christopher’s are learning the show is mightily impressive and really pushes the whole company on. The great thing about being an actor, unlike most other jobs is the fact that someone like Joe or Tom (who have just left drama school) can lead a company comprising of actors with decades of experience and it’s never questioned. Everyone’s point of view is as valid as anyone else’s. We learn as a team and look out for one another. A rehearsal room is a place not of competition but of encouragement and goodwill. The 4 actors who have been in the show a year already, and have to perform in the evenings, show as much commitment and energy to the piece as us newbies. This is what theatre is about!

Today we watched the scene where Christopher puts the giant train track together, and the excitement at seeing the train go round for the first time was palpable. However Elle our Director, like British Rail is keeping us waiting patiently on the platform as the train is delayed.

The first stagger through of Act 1 on Friday afternoon went really well, and everyone was buoyed up by how well the story holds up without the set and costume etc. Joe really held the story together as the play travels very fast. The atmosphere was supportive and it felt like the company has garnered a really good solidarity, which will hold us in good stead through the coming year.

Today I saw 15 tired actors, so this week was a good week.

The new cast will take over at the Gielgud Theatre from 20 June 2016, book your tickets to see them now!